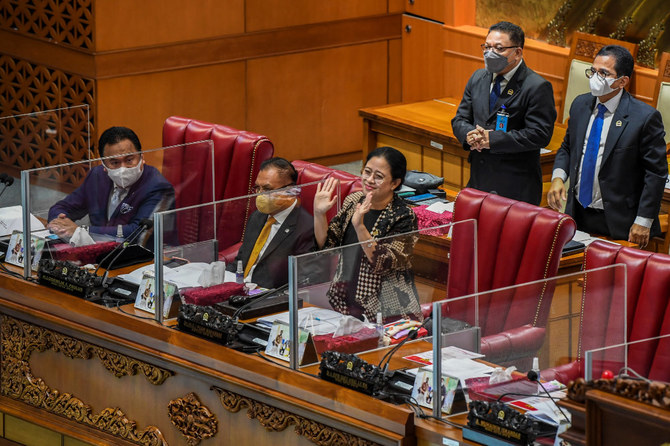 JAKARTA: Indonesia’s parliament passed on Tuesday a landmark bill providing a legal framework for victims of sexual violence to seek justice, a breakthrough move that was welcomed by activists in a country where this type of abuse is often regarded as a private matter.

A majority of lawmakers backed the bill that for years was stalled amid opposition from conservative groups in the world’s largest Muslim majority nation.

The new law provides definitions of acts of sexual violence as punishable criminal offenses and recognizes that men and children can also be victims, a provision that addresses a loophole in Indonesia’s Criminal Code, which only recognized rape and lewd crimes committed by men against women.

“We hope that the implementation of this law will confront and resolve cases of sexual violence, protection of women and children in Indonesia,” Puan Maharani, speaker of Indonesia’s House of Representatives, told parliament.

The legislation also consists of provisions for the protection and recovery of victims, and further recognizes cyber sexual harassment, forced contraception, and forced marriage, as forms of sexual violence.

Among the nine political parties in parliament, only the conservative Prosperous Justice Party had rejected the bill, arguing that it should regulate against extramarital sex and “sexual deviations.”

Activists and lawyers have broadly welcomed the legislation, which also mandates the establishment of a trust fund regulated by the government and recovery services for victims.

“On the one hand, I still can’t believe that we now have a law against sexual violence, especially when the process has been long, arduous, and deliberations were tough,” Tunggal Pawestri, gender rights activist and executive director of Hivos Foundation, told Arab News.

“This is the result of all our hard work, and we finally succeeded. I am very, very happy personally, and I really appreciate that the parliament and government were really committed to pass the bill this year as promised.”

The new law stipulates prison terms of up to four years and about $14,000 in fines for electronic-based sexual violence, and up to 15 years in prison and a fine of nearly $70,000 for sexual exploitation.

The National Commission on Violence Against Women and civil society groups proposed the bill in 2012. It was only in January this year, a decade later, that President Joko Widodo appealed to lawmakers to speed up deliberations.

As the law was enacted, another challenge ahead will be its implementation.

“I think this will take a long time, we have to make sure that the public knows the content and what has been approved, what are the rights of the victims,” Pawestri said.

“This understanding must be circulated among the public, so that the victims have more confidence to find legal assistance.”

Siti Mazuma, director of the Jakarta Legal Aid Foundation of the Indonesian Women’s Association, said there are concerns that law enforcers may not be prepared to implement the new legislation.

“There’s a lot of hope with this law,” she added. “So this must be an important aspect that we watch over together.”