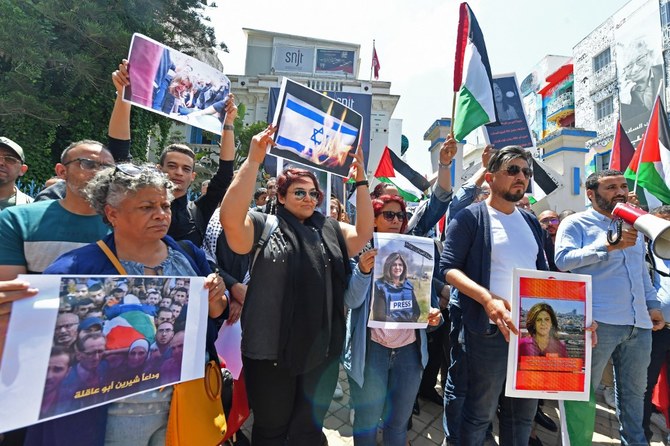 Arab journalists paid tribute on Wednesday to Al Jazeera reporter Shireen Abu Akleh who was shot and killed — which they blamed on Israeli gunfire — while covering developments in the West Bank.

Linah Alsaafin, producer at Al Jazeera English, wrote: “My god. What news to wake up to. Veteren (sic) Al Jazeera Arabic reporter @ShireenNasri has been killed by Israeli forces while covering a raid into Jenin refugee camp in the occupied West Bank. We grew up watching Shireen on TV. Total shock.”
Similarly, Arwa Ibrahim, another colleague of Abu Akleh at Al Jazeera, tweeted how she listened to her reports growing up and said she was devastated by the news.

“I grew up listening to Shireen Abu Akleh’s brave voice on Palestine & became privileged to work alongside her while reporting from Jerusalem & the occupied West Bank. Shireen was shot dead by Israeli police while doing her job — reporting. This news tears into all of us,” Ibrahim tweeted.
Dima Khatib, managing director of AJ+, praised Abu Akleh for her bravery and pioneering career in war reporting, tweeting: “Shireen Abu Akleh was one of the first Arab women war correspondents in the late 1990s, when the traditional role of women on television was to present from the studio.”

“Shireen was one of the pioneers of the generation that broke the stereotypical gender roles in television journalism. Her bravery has always been a huge inspiration to all of us.”