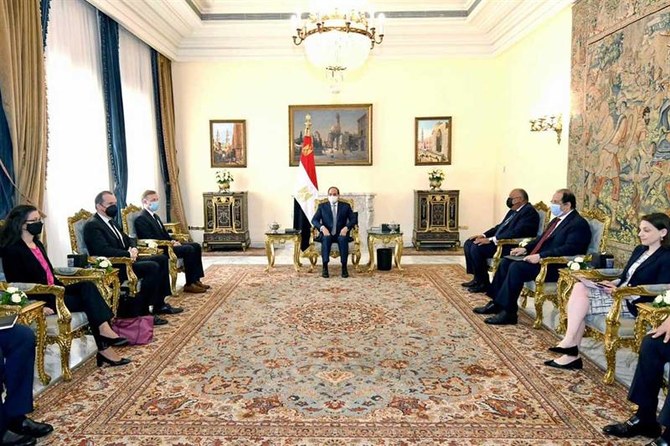 CAIRO: The US government is hoping to “develop partnership relations” with Cairo, an Egyptian presidential spokesman said after meetings between President Abdel Fattah El-Sisi and US National Security Adviser Jake Sullivan in the capital.

The spokesman said in a statement that Sullivan conveyed that “Washington aspires to develop partnership relations with Cairo and move them to broader horizons during the coming period, within the framework of the close and extended cooperation relations between the two countries.”

President El-Sisi affirmed “Egypt’s keenness to strengthen its extended strategic partnership with the US, as well as intensify cooperation and coordination between the two countries at various levels, within the framework of the common interests of the two countries, and to support efforts to restore security and stability in the Middle East in light of the tension and turmoil it is witnessing.”

The Egyptian president stressed that “solving the Palestinian issue in accordance with international references would impose a new reality and open broad horizons for building peace and building bridges of trust, cooperation, construction and development throughout the Middle East.”

Sullivan expressed his country’s appreciation for the Egyptian efforts to establish peace in the region, in addition to its key role in the truce between the Palestinian and Israeli sides and the initiatives for the reconstruction of Gaza.

El-Sisi affirmed “the firm Egyptian position based on the need to strengthen the pillars of countries going through crises and strengthen their national institutions, in order to end the suffering of their peoples and preserve their capabilities, as well as help fill the vacuum that allowed terrorist groups to expand and spread.”

Sullivan praised Egypt’s tireless efforts in this regard, and consensus was reached on the importance of advancing cooperation, given the major danger posed by terrorism at the international level.

El-Sisi and Sullivan also discussed the developments of the Grand Ethiopian Renaissance Dam, with the Egyptian president stressing his country’s firm position on the need to reach a binding legal agreement for the process of filling and operating the dam, in a manner that preserves Egyptian water security and achieves the common interests of the three countries involved in the arrangement.