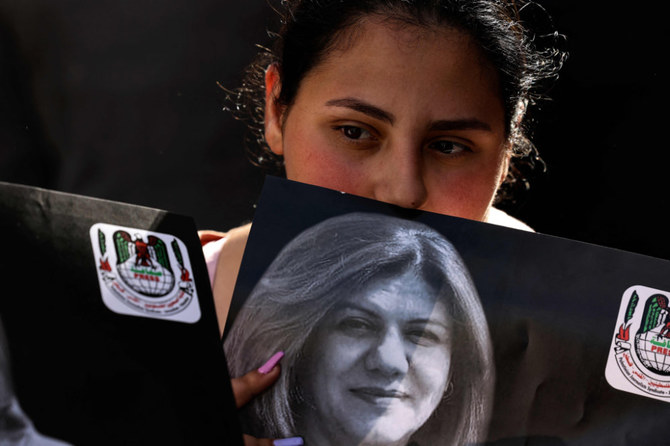 RAMALLAH: Shock, anger and sadness flooded through the Palestinian territories following the killing of senior Palestinian journalist Shireen Abu Akleh, 51, at the hands of the Israeli army early on Wednesday.

She was shot in the head on the outskirts of the Jenin refugee camp in the northern West Bank by Israeli Defense Forces.

Israeli forces initially raised the possibility that Abu Akleh might have been killed by stray Palestinian fire, saying militants were also present in the area.

However, army chief Lt. Gen. Aviv Kochavi later stepped back from that assertion, saying that “at this stage, we cannot determine by whose fire she was harmed and we regret her death.”

Abu Akleh, 51, was a respected and familiar face in the Middle East, known for her coverage of the harsh realities of Israel’s military occupation for the past three decades.

The US State Department called her death “an affront to media freedom.”

Her producer, Palestinian journalist Ali Samoudi, was hospitalized in a stable condition after being shot in the back.

Samoudi told Arab News that at the time of the shooting, there were no Palestinian gunmen in the area. He described how they advanced up a street carrying their cameras and wearing bulletproof vests on which the “press” sign was visible in English. Samoudi said that there were no pedestrians in the street, adding that there was no exchange of fire, and not even stones were thrown towards the troops.

Numerous videos that have surfaced on social media also show the absence of any violence when the journalists were attacked.

The Palestinian Institute of Forensic Medicine at An-Najah National University in Nablus said that the result of the autopsy indicated that she was hit by an explosive bullet that penetrated her head and killed her instantly.

It confirmed that the bullet that hit her caused an extensive laceration to the brain and skull, and the weapon used was high-caliber.

The deformed bullet is now being analyzed in the laboratory to ascertain who was responsible for her killing.

The EU urged an “independent” probe into the killing while Thomas Nides, the US ambassador to Israel, called for a “thorough investigation” into the killing of the US citizen, who joined Al Jazeera in 1997.

The Qatari government, which funds Al Jazeera, condemned the killing “in the strongest terms.”

Palestinian Prime Minister Mohammad Shtayyeh said: “With sad hearts, we mourn the death of the knight of the media and the icon of the national press. The martyr Shireen Abu Akleh was killed by the bullets of the occupation soldiers while she was carrying out her journalistic duty to document the horrific crimes committed by the occupation soldiers against our people.”

“Whoever was reporting the news became the news herself,” was the top trending hashtag trending on social media following Abu Akleh’s killing.

Elsewhere, the Israeli army shot dead a 16-year-old Palestinian boy in the West Bank city of Al-Bireh on Wednesday.

The Palestinian Ministry of Health said that the boy died after being shot directly in the heart while he was near his school.