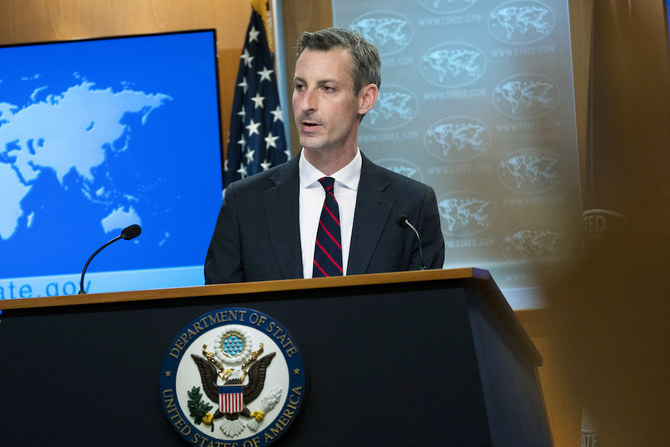 The United States voiced horror Tuesday at new files on the incarceration of China’s Uyghur minority and said they showed that abuse was likely approved at the highest levels in Beijing.
“We are appalled by the reports and the jarring images,” State Department spokesman Ned Price told reporters.
“It would be very difficult to imagine that a systemic effort to suppress, to detain, to conduct a campaign of genocide and crimes against humanity would not have the blessing — would not have the approval — of the highest levels of the PRC government,” he said, referring to the People’s Republic of China.
The United States accuses Beijing of carrying out genocide against the Uyghurs and other mostly Muslim, Turkic-speaking people in the western region of Xinjiang, where rights groups say more than one million people have been rounded up.
“We have and we continue to call on the PRC to immediately release all those arbitrarily detained people, to abolish the internment camps, to end mass detention, torture, forced sterilization, and the use of forced labor,” Price said.
Adrian Zenz, an academic who has probed the treatment of the Uyghurs, published a leak of thousands of photos and official documents that shed new light on violent methods to enforce mass internment.
The files, parts of which have been verified by multiple news organizations including the BBC and Le Monde, also provide a window into life in detention facilities.
Photos appear to show officers restraining hooded and shackled inmates with batons, while other guards wearing camouflage stand by with firearms.
The release comes just as UN human rights chief Michelle Bachelet started a visit to China that was criticized by the United States, which says that she had not secured sufficient access.
The US ambassador to the United Nations, Linda Thomas-Greenfield, said in a tweet that Bachelet “must take a hard look at these faces and press Chinese officials for full, unfettered access — and answers.”

‘Most important moment of my life’: Filipinos embark on Hajj after two-year hiatus